”The All is Mind, The Universe is mental” KYBALION 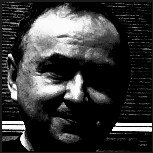 "Until my teenage years, I lived in a big city, in Romania, in front of the main entrance of a big and beautiful cemetery. I used to walk there, and every day I saw corpses passing by, according to the orthodox ritual, in opened coffins. They were followed by their relatives for a last tribute. Sometimes, especially when there was a fanfare, I followed myself the procession to the grave ... This could perhaps explain my fascination with the mysteries of life and death, and my questions about reality or the "non-reality" of our existence."
"Drawing has always been one of my favorite passions and hobbies. From an early age, hours were spent drawing, whenever I could. At school, I was a good student, but all my classes were spent by listening to teachers but also drawing, hidden behind my notebooks. The subjects in these drawings were mostly characters in situations I created in my mind. At home, I also trained to reproduce portraits after paintings of old masters, photographed in black and white. But I especially liked creating things that did not exist. My imaginary life was rich."
"In truth, after all these years, things have not really changed. I always like to create. On the spiritual level, my questions have evolved, of course, at the same pace as my knowledge. Over time, my black and white drawings have left more and more room for paintings. The narrative element plays a leading role in a large part of my paintings and, exploring the interaction between "reality" and "over-reality" or psyche is to a large extent what nourishes my work."
Justinian B. is essentially self-taught; He also studied art history and the visual arts at the University of Quebec in Montreal, and during a stay in France, he discovered the ancient techniques of painting icons with a Russian Orthodox priest in Paris. Born in 1963 in Romania, Justinian has three cultures and three home lands. After a stay in Austria where he obtained political refugee status with his family in 1978, he lived in Canada for 13 years. Currently based in Lyon since 1990, Justinian shares his life between France and Canada.